How horrible it would be to match with every single woman on Hinge.

Great for your ego but it would be incredibly time-consuming sorting through the women in an attempt to find the needle in the haystack.

As perhaps counterintuitive as it sounds, you don’t want to have the magic power to match with every woman you see on Hinge.


You only want to match with compatible women.

But how do you do that?

There are a few ways.

One involves using filters. Hinge has a range of filters to use (and you have access to even more if you’re using Hinge Preferred).

However perhaps an even more granular way to attract the right women while repelling those you’re not compatible with is by using Hinge prompts.

Hinge prompts give you a chance to display who you are and talk about the type of person you’d most want to be with.

However, not all prompts are created equal.

The my most controversial opinion is prompt is the ideal platform to filter women.

As the prompt asks, write your most controversial opinion and see who resonates with you.

Chances are you’ll attract those of a similar mind and repel those whose opinions differ and who you’re most likely not compatible with. 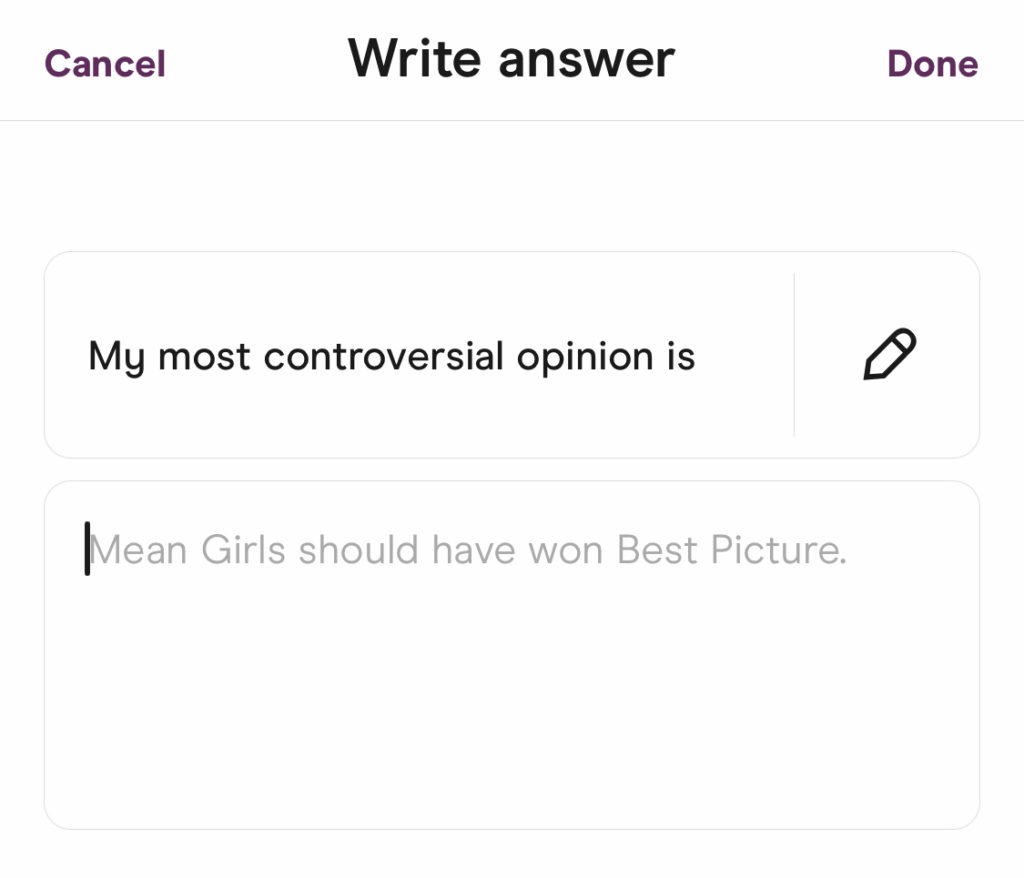 My Most Controversial Opinion Is

There are a few ways to answer this prompt.

You could be 100% serious and provide a truly polarizing opinion that will piss some people off while making others cheer.

Or you could do the opposite and provide a witty yet playful answer that makes the women of Hinge chuckle until they feel compelled to like your response.

To illustrate both answers we’ll provide you with a list of the best my most controversial opinion is Hinge responses. 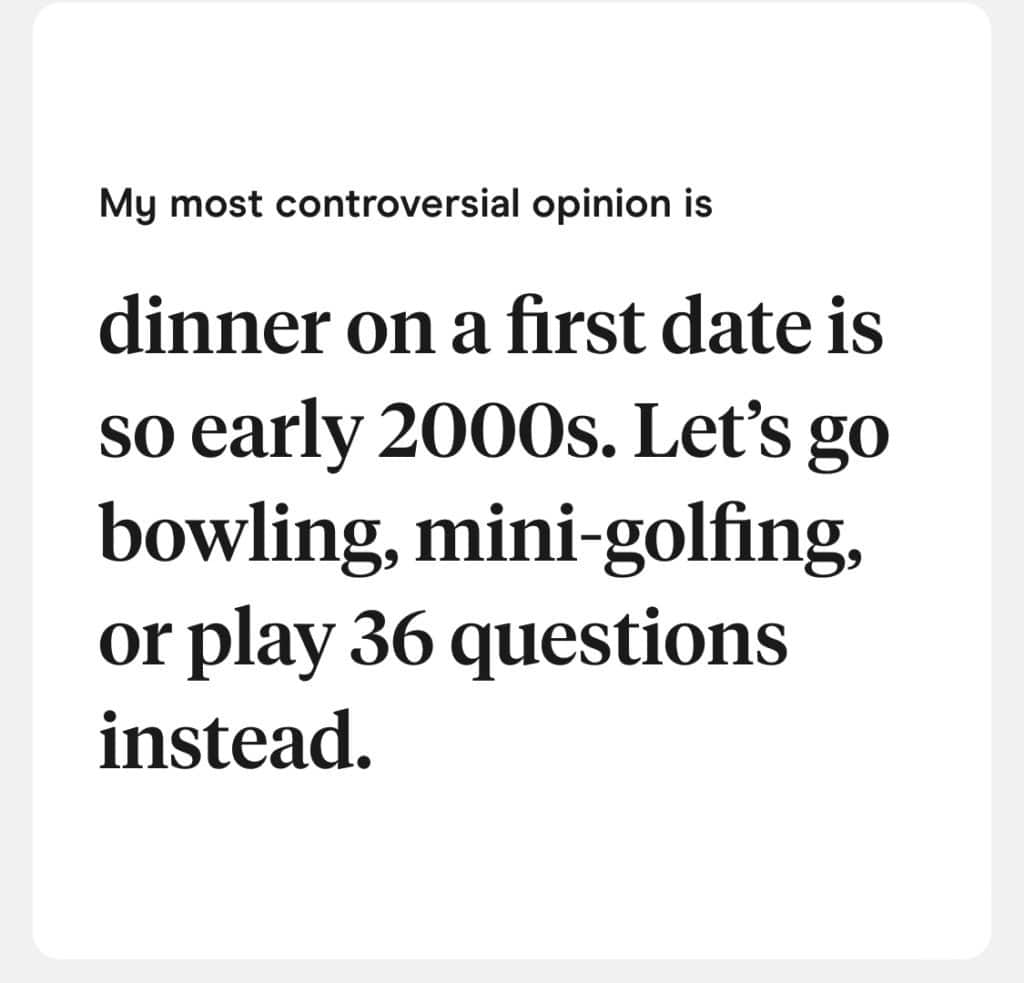 DL this is going to ruffle some feathers.

Dinner on a first date is a classic, but it’s also played out.

Forcing yourself to sit there for hours as you try to make conversation can be super awkward. It’s much easier if your interaction revolves around an activity. Playing a game, going for a run, or doing another activity will help facilitate the conversation.

Not to mention dinner dates can last quite a while and be expensive.

In my coaching program, we teach men how to go on fun, relatively cheap, brief first dates. This means not sitting down for a 3-course meal.

For one you’re going out with a stranger you may not be attracted to the moment they open the door to the restaurant. Why spend oodles of cash and time on a person you have no future with?

Secondly, we teach our students how to find and go on a myriad of dates. You don’t have time to go on multiple 3-hour dates a week. Keep things limited to one hour for first dates.

Look if dating someone from the other political party is a dealbreaker make that known.

If you refuse to cross the aisle you surely won’t be walking down it with someone with different political views. Hinge gives you the option of filtering out those from other parties, but answering in this way makes sure you repel anyone that slips by the filter.

It also will appeal to the politically-minded women of Hinge.

It doesn’t get more contentious than politics nowadays. Use this controversy to your advantage and who knows if you’re lucky you just might match with AOC. 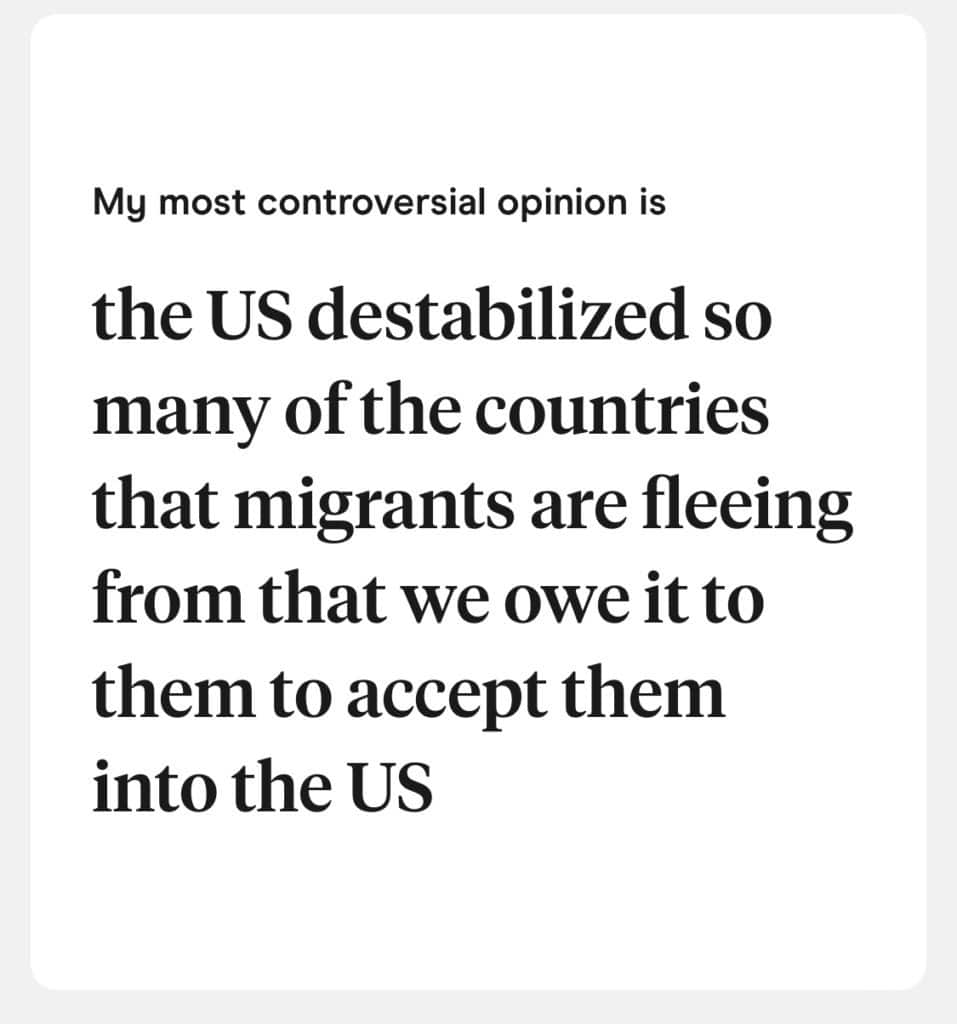 This just heated up.


Even for those on the left, this would cause a bit of controversy.

But hey, this is the perfect literal answer to the prompt.

Now let’s just hope someone identifies with your opinion. And hey, just because the prompt asks for your most controversial opinion that doesn’t mean you have to play ball.

Let me give you an example of what I mean. 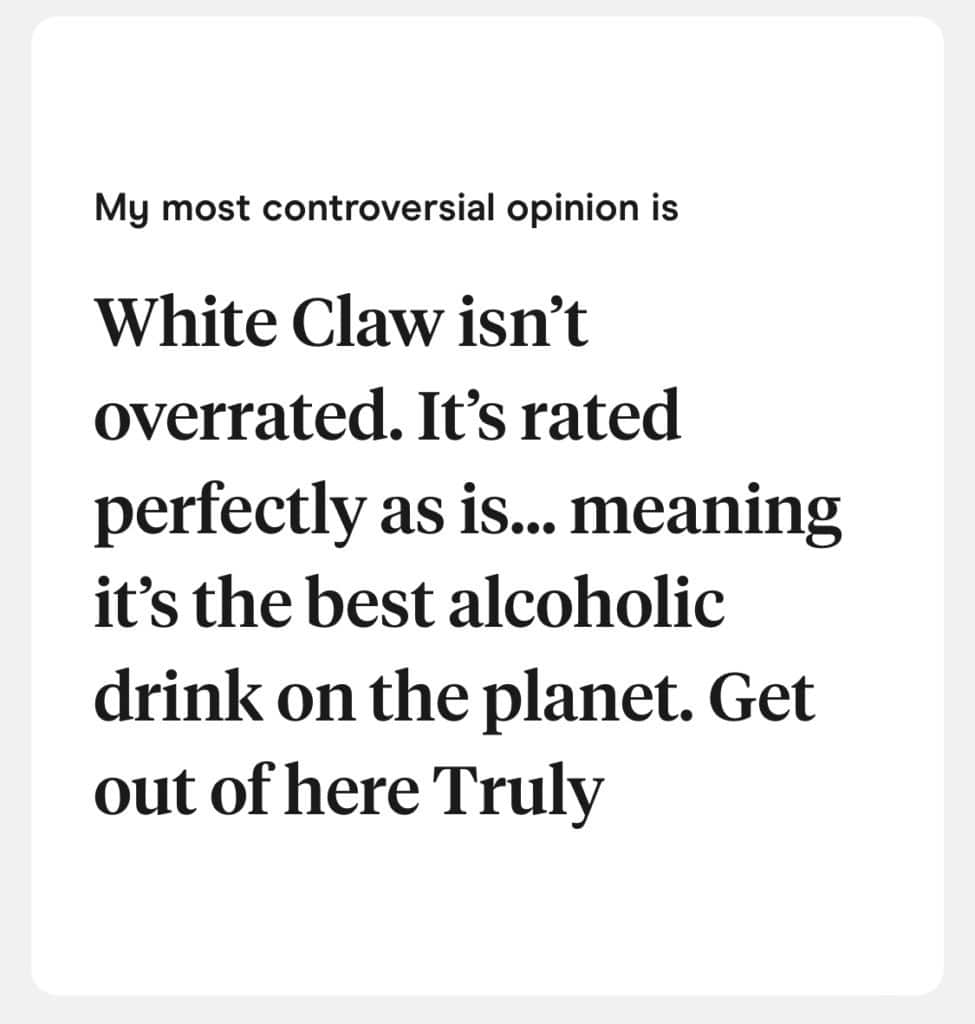 Here’s a perfect example of a prompt response that doesn’t take itself seriously.

It’s an objective fact that White Claws are the best.

This isn’t a controversial opinion at all.

But be careful with your response.

This one will most likely resonate with a younger more party-prone crowd that may not be in the market for a long-term partner. If that’s what you want, go ahead and post about alcohol. If not, best amend your answer. 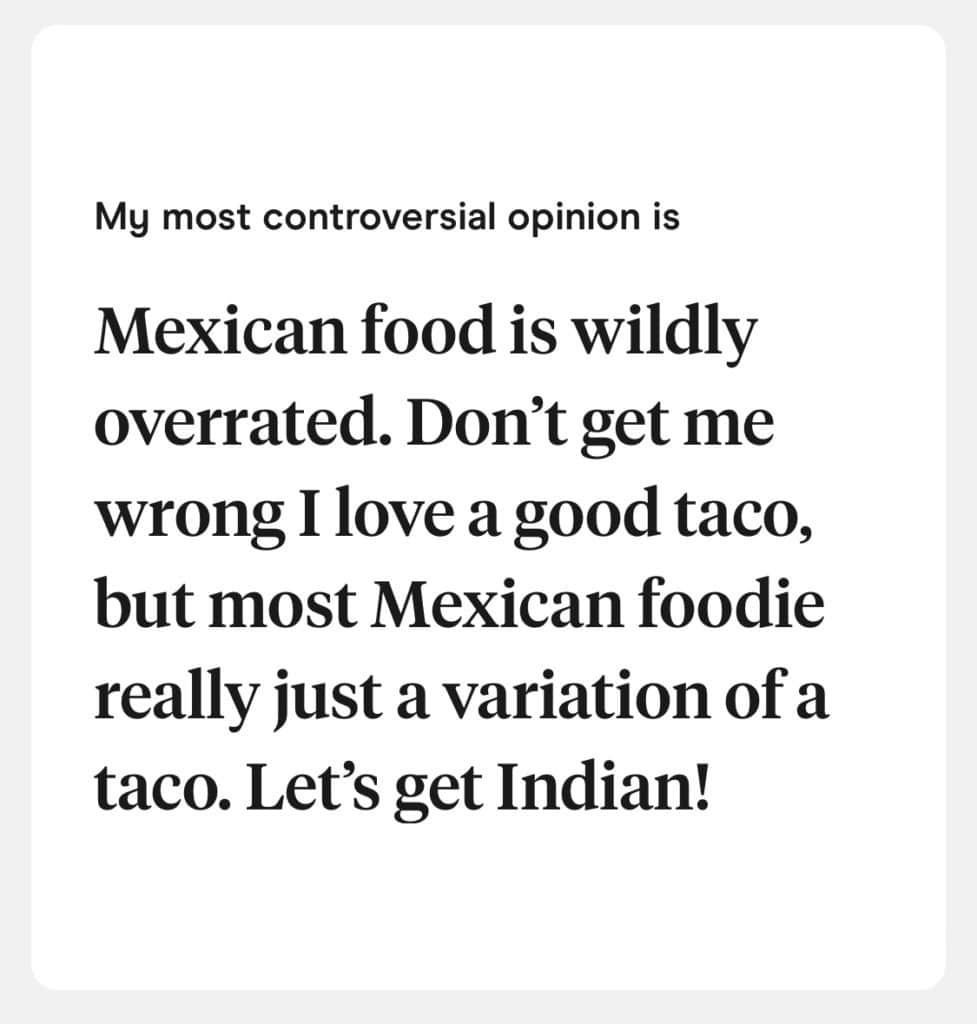 You’ll have a lot of marg and taco lovers disagreeing with you.

This prompt has a subtle brilliance to it.

Secondly, it pitches a first date, “let’s get Indian!”

Remember that dating apps are for dating. They’re not for stacking matches and feeling good about yourself. With that in mind try to pivot away from the app and schedule the first date with a TDL as soon as possible. 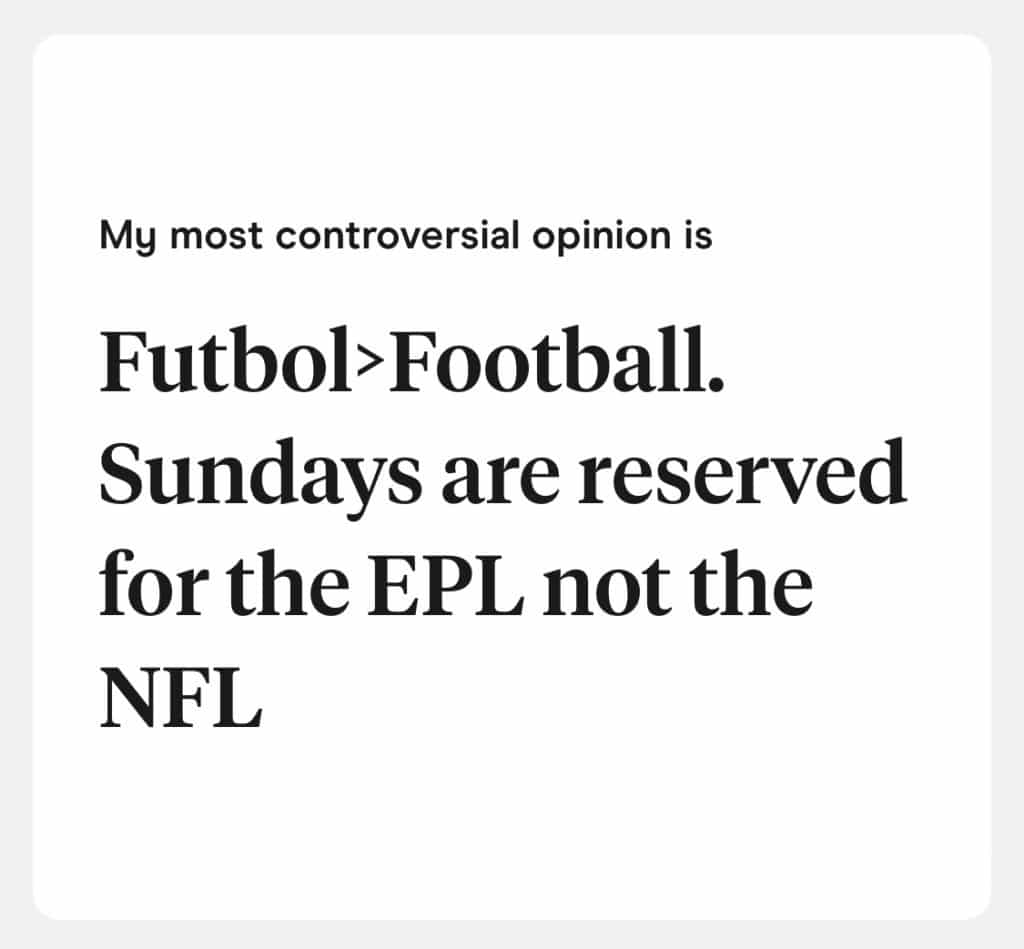 Matching with a woman that likes your, my most controversial opinion is, response should make you want to take your shirt off and jump into the crowd of imaginary spectators.

Feel free to show her who you really are by posting about things are you truly care about, regardless of how popular or unpopular your opinion may be. 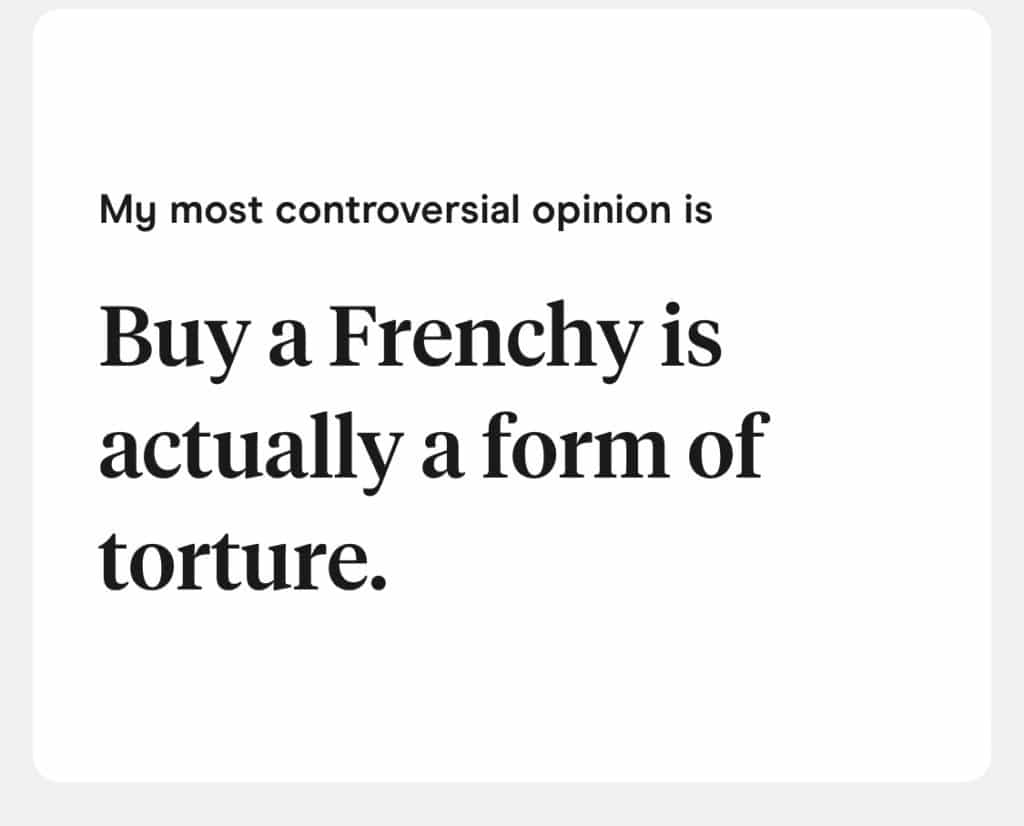 Frenchies are beloved creatures, even though they are destined for short, awkward, painful lives.

Though there is one issue I take with this response.

As you can see there’s a grammar error.

Grammar errors are turn-offs. They make you look lazy and uneducated. Considering she doesn’t have much to judge you off of, this one word could mean being passed over. Double and triple-check what you post before sending it off to be judged by the masses. 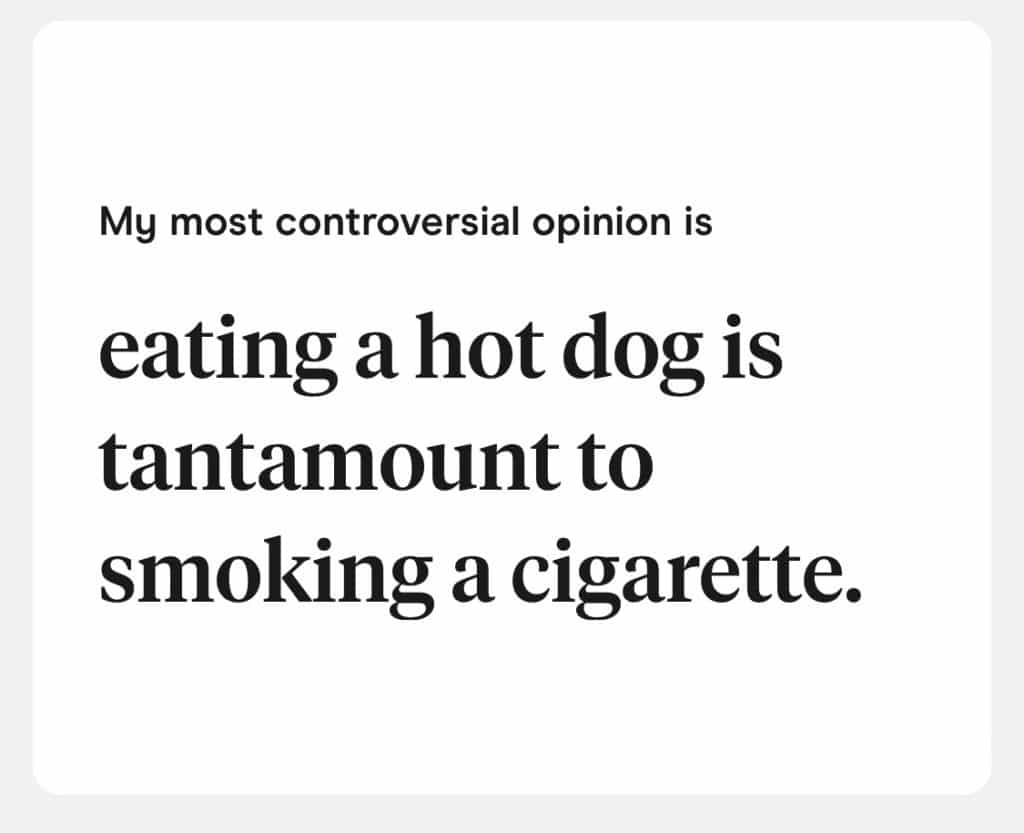 If you’re trying to attract healthy eaters as well as non-smokers this is the prompt response that will do it.

It clearly signals that you’re probably not a meat eater and that you put a lot of thought into what you eat. 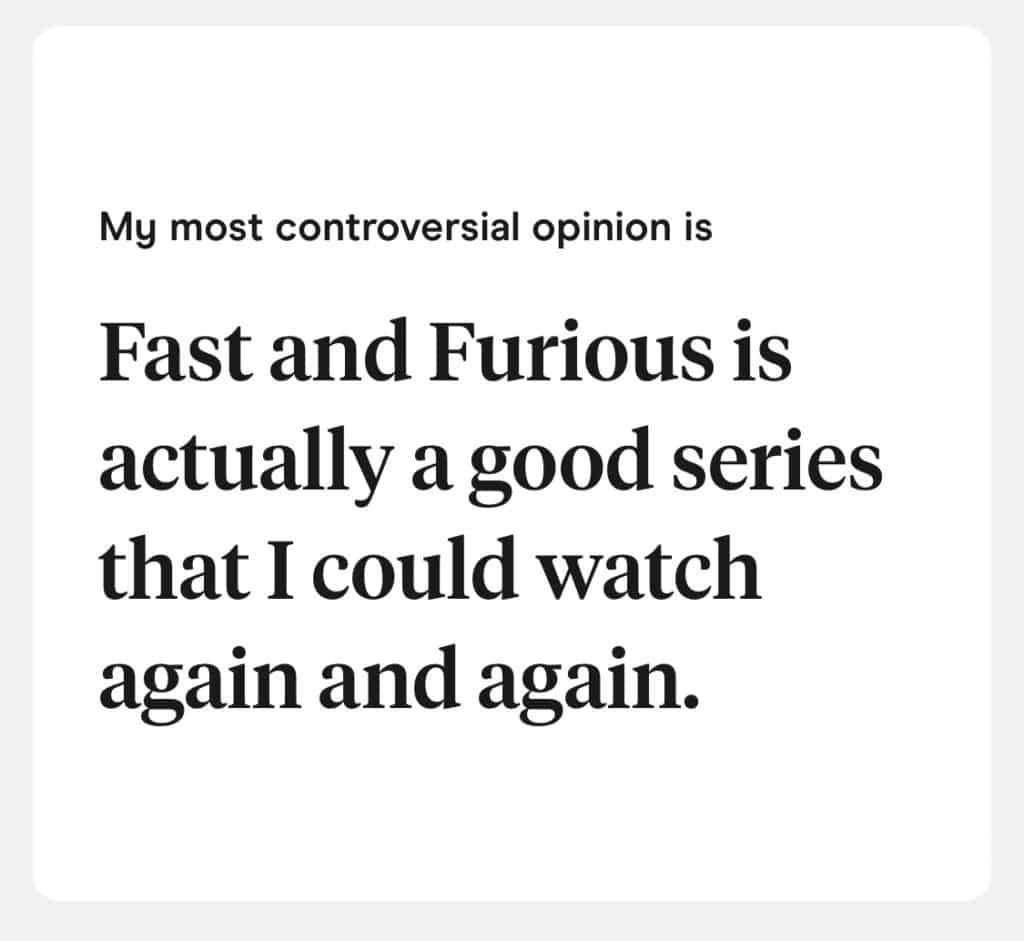 Honestly, I think this is more controversial than anything you could write about politics. 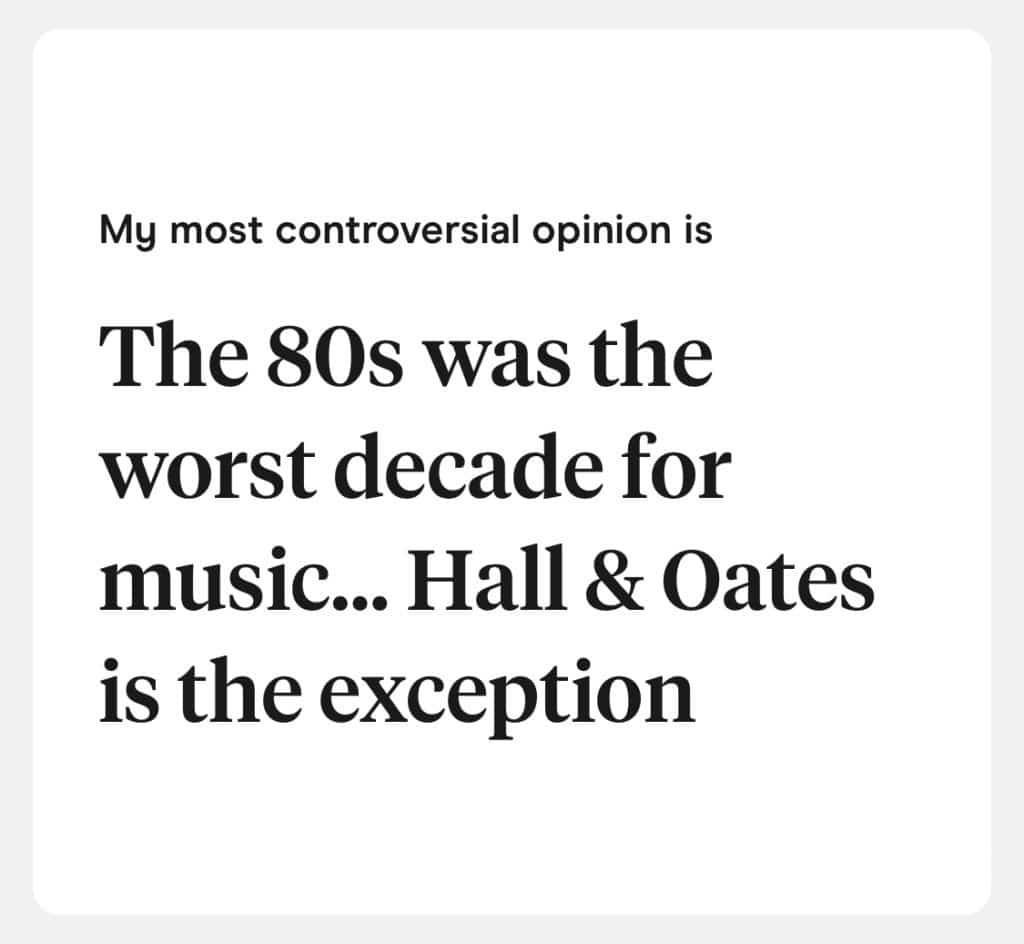 I mean to be fair there are a few options. The 90s and early 2000s were kinda bland as well.

Don’t ask my fiance as he is forever in love with The Smashing Pumpkins (don’t even ask me how many times I’ve heard Billy Corgan rattle off Zero).

Whatever your opinion talking about music is never a bad idea.

Everyone loves music and has songs they love and hate.

Talking music will bring up positive associations and make it easy for you two to bond… unless she’s an 80s fan. 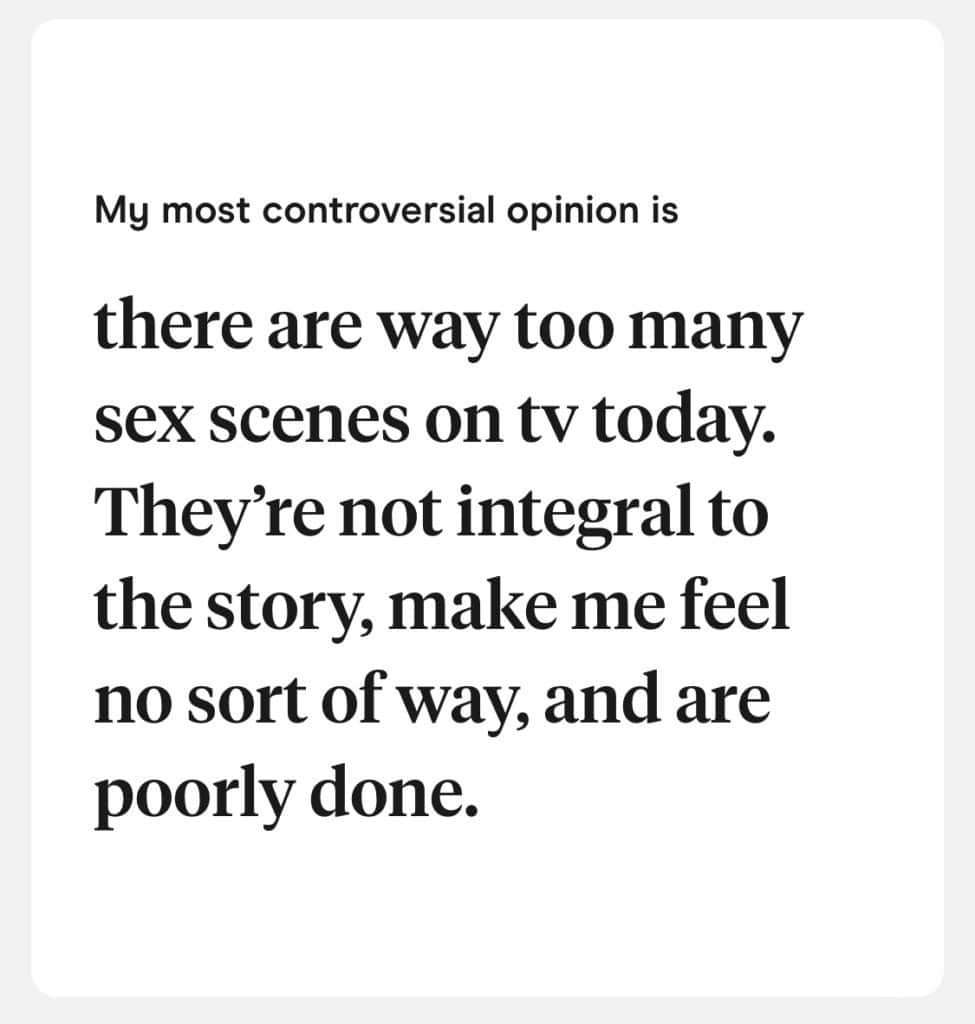 Another easy way to bond with the ladies of Hinge is to talk about your favorite shows, least favorite shows, or the things that just really grind your gears about TV these days.

As you can see there are a variety of ways to answer this prompt.

From injecting humor into your answer to offering up a more serious one there are no shortage of ways to answer this Hinge prompt.

If you’re still wondering how to best answer his prompt here are just a few more ideas:

A Note About Photos

We’ve spent quite a while talking about the best Hinge prompt responses and rightly so. But I’d be remiss if I didn’t make a note about photos.

Even though Hinge claims to not be superficial, it’s still being used by highly superficial humans.

With that said if you don’t have quality photos, she won’t stick around to read what you’ve written.

With that said here are a few tips to keep in mind when choosing photos:

Now that you have an awesome Hinge prompt response and roster of photos it’s time to get liking.

But bagging a bunch of matches isn’t good enough.

That’s just what we teach our clients in our lifetime-style coaching program, Dating Decoded.

We teach you the ins and outs of online and IRL dating via four segments:

We also teach you via four learning pathways:


If you’re a single guy looking for a long term relationship with a woman you’re really excited about, book a Zoom call with me or a member of my team today. 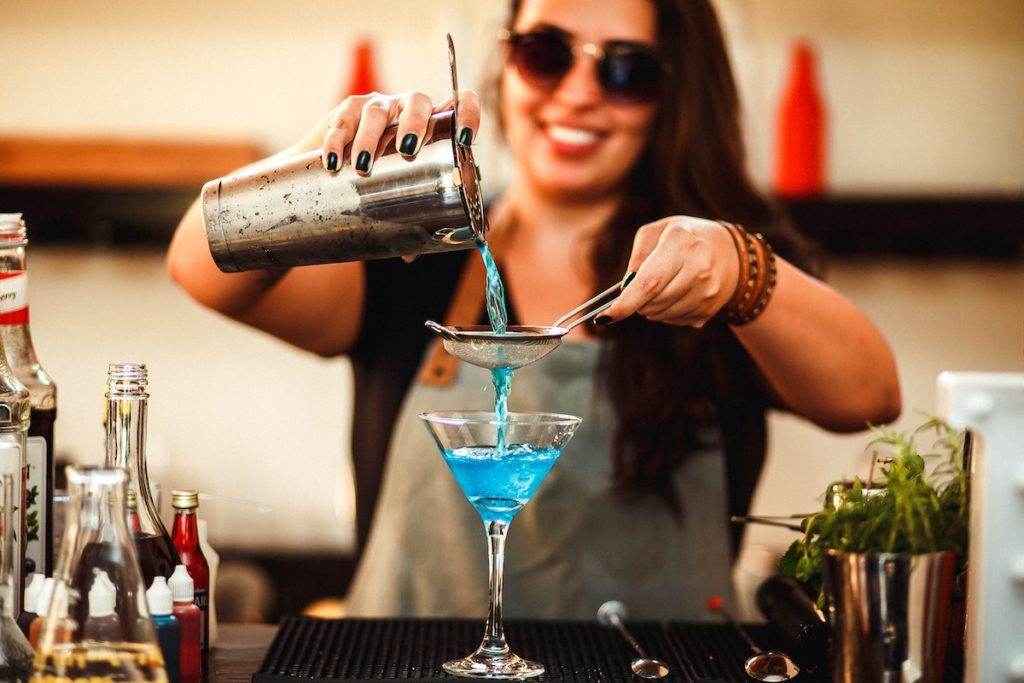