It seems like every few months another company claims to have invented a novel dating app that aims to knock Tinder off the top of the totem pole. This upstart app will claim better algorithms, a less shallow user base, and a sleeker design. Despite the claims, what you typically wind up using is Tinder 2.0. Romance apps keep being the culprits of major pitfalls. Yet there is one application that seems to have broken the dating app paradigm.

Hinge sounds more like a DIY house maintenance app than the next big thing in online dating. Despite the name, Hinge seems to be the only romantic application that isn’t designed to get you addicted. While apps like Tinder and Bumble turn profiles into game cards designed to keep you swiping, Hinge takes a different approach.


As the company’s catchphrase boasts, Hinge is the application “designed to be deleted.” Unlike Tinder’s radioactive dating pool that allows anyone to take a dip, Hinge screens potential suitors before they enter your pool. The 2012 founded app puts a modern spin on an old school approach to dating. According to a 2015 survey of more than 2,000 participants ages 18-34, a whopping 38.6% said they met their significant other through friends in common. The chief method of meeting our significant others doesn’t seem to have changed throughout the years despite the rush towards finding love through dating applications.

Hinge has harnessed the power of this old-school approach but has turbo-charged it by using it to inform how their app functions. This nascent dating app only connects you with users that are friends of your Facebook friends (up to three acquaintances away). The company says that by only interacting with friends of friends, you’re not meeting completely random people. Linking your account to Facebook users are able to screen romantic candidates.

Hinge is a favorite of my clients. It’s less superficial than other dating apps, attempts to curb ghosting, screen potential romantic suitors, and was even used by Democratic presidential candidate, Mayor Pete Buttigieg met his husband. It’s for these reasons that we’ve created a male test account in the attempt to uncover useful Hinge hacks that will make you stand out. Here are the seven most useful Hinge hacks for guys that we’ve found thus far.

Hinge users have the option to link their IG account. When given the opportunity external applications should always be linked to dating applications. Whether it be Spotify, Twitter, or IG, giving other users more info about you is always a good idea.

A linked IG account will appear at the bottom of her profile. Commenting on an Instagram photo of hers is a good decision for a few reasons. It shows that you’ve taken more than a perfunctory scan of her profile. To scroll all the way to the bottom of her profile and proceed to comb through her Insta indicates interest. In the app culture where most men swipe before even looking at a second photo or reading a bio, showing that you took time to check out her profile can be flattering. She’ll take note of your interest and be more likely to respond.

Commenting on an IG photo lends itself to crafting a better message. A message will only ever be as good as the content it touches on. Perhaps her Hinge profile is saturated with dog photos, but you’re a cat person.

That doesn’t give you much to work with. But when you snoop around her IG you see that she too is an avid hiker and has recently trekked one of your preferred mountains. More content means a greater likelihood that you’ll e able to find a connection.

Naturally, the feral beast inside of you is more likely to comment on a bikini shot than a family portrait. If you weren’t aware already, she’s inundated with gross compliments about her body on a daily basis. The way to stand out amongst the group of wild hyenas isn’t to comment on a body part that others have overlooked, say her collarbone or toes.

Online dating 101; never comment on her body. It’s been done before. She wasn’t a fan of it the first time, that sentiment hasn’t changed after 178 other messages from strangers complimenting her body.

Be the guy that stands out by acting out in a way that’ll land you on the opposite end of the spectrum. Strike up a conversation by commenting on a family photo. Take a look at the below example from our test user: 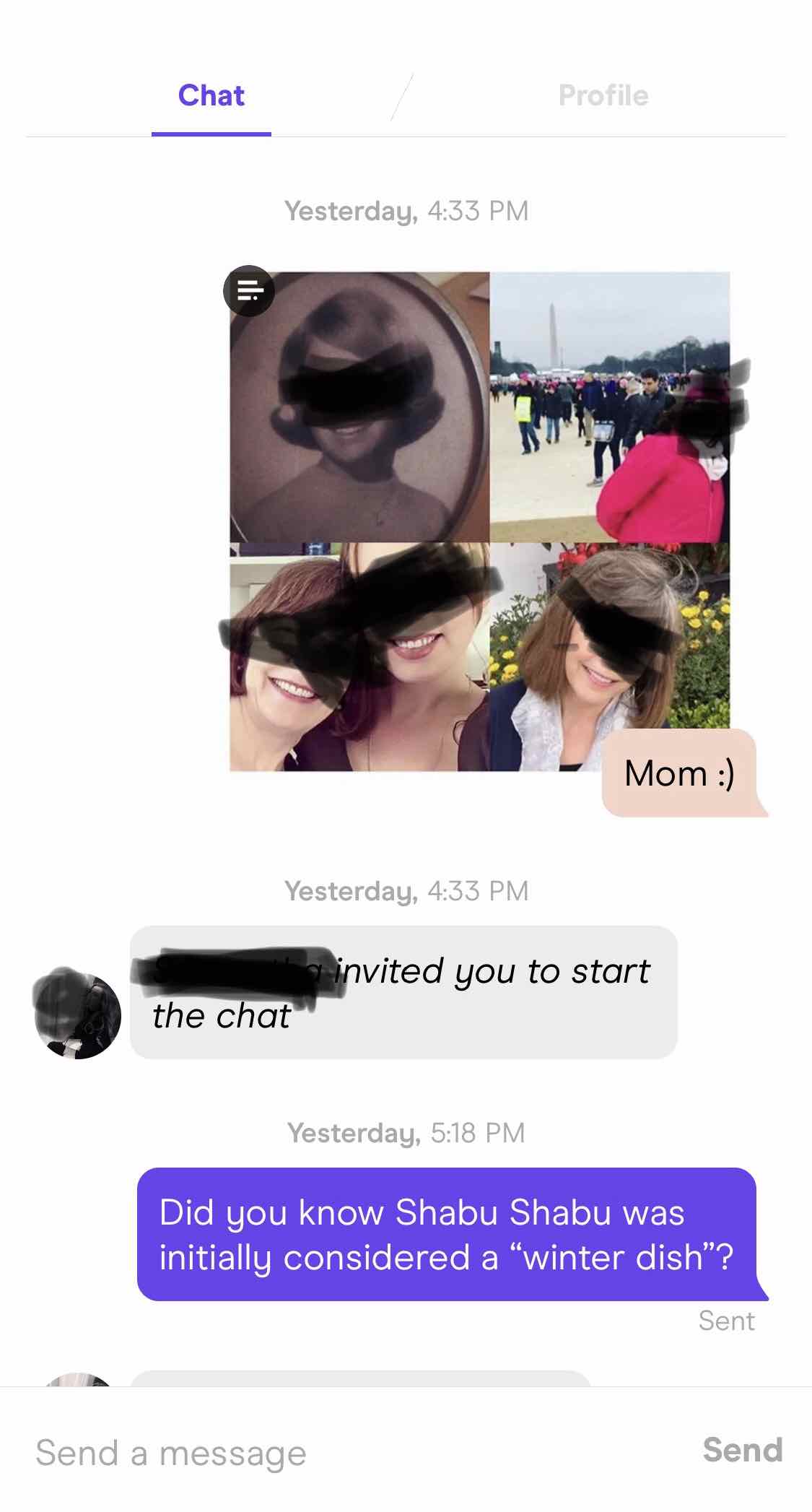 A man inquires about outings with the family, a child lasciviously ogles from afar. You don’t need to kick-start the conversation by dialoguing about wholesome family values; this isn’t Farmers Dating for christ sake. Most likely the family photo is one taken on vacation or during the holidays. Ask her where her family traveled to or find a commonality that you two can vibe on. If she doesn’t have a family shot in her bio, scroll down and peruse her IG.


3. After She Matches With You, Offer Up A Fun Fact

There are a few ways you can connect with people via Hinge. The most popular ways involve commenting on someone’s profile, liking photos, and matching. Matching is the most common way that two people connect. However, matching is only an indication that there’s an inkling of interest between two parties. To turn that barely lit flame into more than just embers you’ll have to pen a quality opening message. Interesting facts are great ways to begin a conversation. Don’t believe me? Let’s have a look at the examples below to illustrate my point. 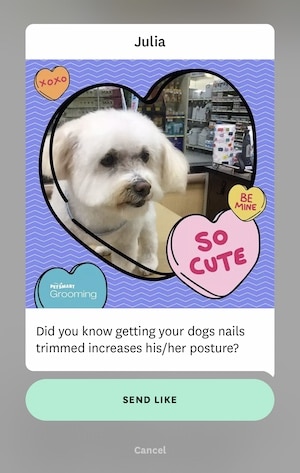 Don’t send her any random factoid. Have her profile influence which fact you’re going to send her. Having the conversation revolve around her dog as the comment above does, is an ideal first message. Send her a fact that works as a segue into a conversation. 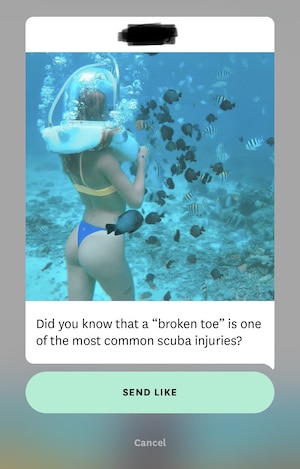 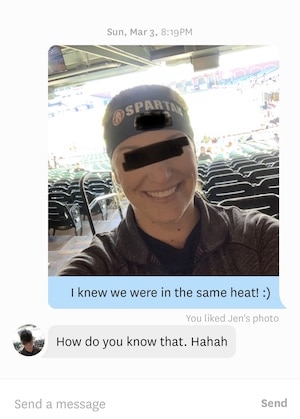 It would have been all too easy for the user above to compliment his new match’s appearance. It’s clear the woman’s gorgeous, but what’s also evident is that she’s constantly receiving messages about her looks. Stop yourself before you send her a cliche message that’s a carbon copy of every message she’s received this week.

The fact above works because it indicates that the two frequent the same place. This shows her that the user is a man of good taste. It doesn’t hurt that the fact is unique and one she surely wasn’t’ already aware of. For more help on this topic, check out my other article on How to Comment on Hinge.

4. Once She Replies, Lay Down A Solid TDL

The point of using a dating application is to meet eligible suitors in person. Dating apps like Hinge aren’t made so that users can collect matches like trophies and boast about how they have more matches than their buddies. Online dating apps have the ultimate goal of getting two people to meet in person. Once this happens the app can remain unopened. There is no point in treating a match like a pen pal. Don’t get stuck playing conversational ping-pong. Navigate the conversation towards a TDL. A TDL or time, date, location, is a method of asking a woman out on a date.

Once a few jokes have been made it’s time to offer up a TDL before you get stub in digital quicksand. A TDL is used because, well, let me demonstrate.

Which message is most likely to a date?

A: “Hey Cheryl, want to hang out sometime?”

B: “Hey Cheryl! Considering that we’re both unabashed lovers of people watching, would you want to team up at 2 p.m. this Sunday, at Slurs Park so that we watch some unsuspecting park-goers? I’ll bring the snacks and binoculars.”


The second message is a TDL and is much more likely to receive a concrete yes or no than a half-hearted request to hang out sometime in the future.

5. What If She Doesn’t Reply For A Few Hours Or Days?

No need to get discouraged if she doesn’t reply to your message within a couple hours. Think of all the messages you get from women on dating apps. Now multiply that number by 37. Women are inundated with notifications from dating applications, which is why many of them turn off notifications.

If she messages you immediately back, keep the convo going until you can snag a number or ask her out with a TDL. If she takes a couple of hours or days to message you back, it’s likely that she only checks Hinge one a day.

Have a look at her timestamp. You’ll be able to see when she last messaged you. If it was at 5:30 that her last message was sent, message her at 5:15 the next day. That way you’ll be at the top of the queue when she logs back in. You can take a note from her as well and turn off notifications. Reduce the time you spend on dating apps will keep you sane and your priorities in check.

6. What If You’re Not Getting Likes Or Matches?

Even though Hinge is lauded for being the least superficial of the most popular dating apps, it’s users are still human. Naturally, users will gravitate towards pretty pictures. Online daters place a great amount of importance on the looks of other users. If your picture game isn’t on point, you won’t be getting many matches. So how do you remedy this?

You can ask a female friend to change up your photos for you or send out a couple of photos to a few friends and ask them to pick the most attractive one. You can even go so far as to have strangers on Photofeeler.com to rate photos for you. But what are you to do if none of your photos are Hinge-worthy?

Should you not have a pile of profile-worthy photos, there’s only one way to get some. You could ask your buddy to snap a few shots of you at the park, but your buddy’s been the one responsible for taking photos of you these last few years, and as you’ve seen, they’re not up to snuff. If you really want to kick ass when it comes to online dating you’ll want to call in the professional.

Comb through your city for a photographer that specializes in online dating pictures. If you’re in the San Francisco area, I’d recommend Jessica Ruscello. No matter what dating apps tell you, each and everyone is superficial. Quality photos mean securing quality matches.

Don’t throw all your eggs in one basket. Hinge is great and all but to get the most out of online dating you should be using at least 5 dating apps in all. Even online dating has its limits. Meet people the old fashioned way. Mingle at a friend’s barbecue, join a Meetup, ask your friends to introduce you to their single friends, sign up for a cooking class etc. Never limit yourself or feel complacent by tapping into just one social channel.

If you are serious about your romantic pursuit, there’s only one option that is bound to get you results. It’s by MegaDating and hiring emlovz as your matchmaker, coach, or both! 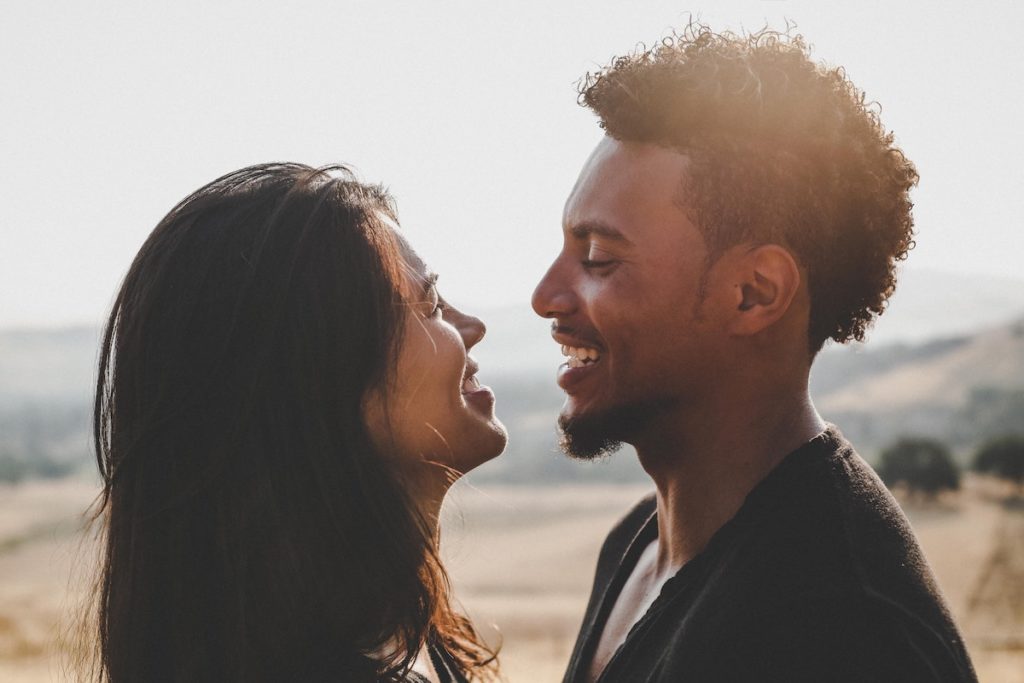 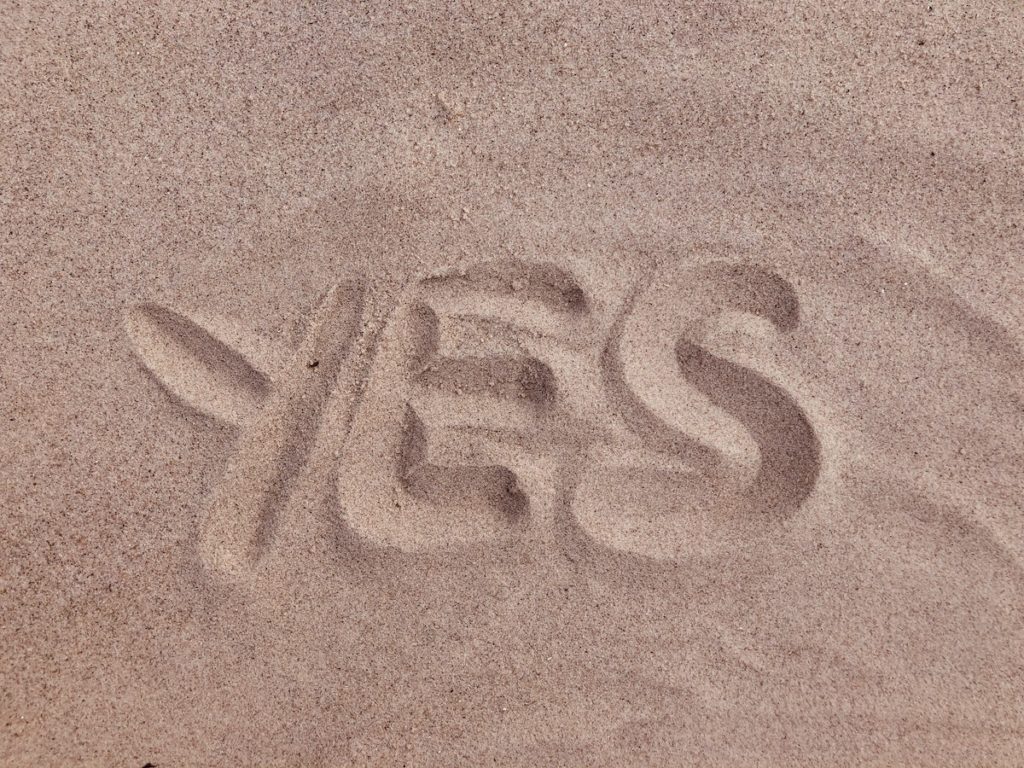